In late October about 18 months ago we got some screaming deals on some trees. That moved us to look for some more and before April of 2013 we had planted 10 new trees 8 of which were fruit trees with more to come. For a while now I have been noticing blossoms on things that end up not producing anything. I mentioned that if we were going to have this many fruit trees maybe we should find a way to get some bees to pollinate them. Now, I had in mind figuring out a way to attract some native Mason bees, but my wife who didn’t work with the USU Bee Lab only knows about honey bees. She went all about getting honey bees. However, by the time we finally decided that bees were going to happen it was too late to get bees. So that started the planning stages.
I didn’t want the normal white boxes you normally think of when you see beehive. So I build some cement block stands. To save some cost, and because I like doing that stuff, the boxes came milled, but unassembled. I got to glue them and set them with 2 inch finishing nails two in each joint; these boxes are solid! A little sanding and on to the next step. Then I stained the pine boxes with a beautiful golden pecan stain and then used a fiberglass resin to seal the outside against the weather.

Using cement screws I mounted a piece of 3/4 plywood that I had finished the outside edge the same as the boxes to the cinder blocks. I pre drilled some holes though the plywood into the bottom board and screwed the bottom board to the mount. Everything was ready for the girls to show up.

Well April 12th was the big day. While the rest of the family was at an Easter activity at church. I drove to Toole and picked up 2 four pound packages of Italy’s finest honey bees. At 4-5000 bees per pound that means I had upwards of 40000 bees in the car with me on the ride home. I’ll be honest I was waiting for the disaster to happen.  Especially after the guy at the bee place said he had tripped and dropped the packages so the bees were a little angry. Rut-Row ;| However, I made it home just fine and then started the prep work for the next potential disaster.  Moving the bees from the box they came in to their new home.

Installing the packages…. I’ll let the video tell that story. It’s about 12 and a half minutes long and well worth the time just for Chey’s commentary.

And yes Cheyenne and Christy were crazy brave.  Neither had any protection at all. But still no stings at all. PS don’t I rock the pants tucked into my socks look. 🙂

Almost a week into it and things are looking great.  Really the girls haven’t been a hassle at all. We “know” that they are there mostly because we all are fascinated by the hives and are hanging out there quite a bit.  The bees could care less that we are there and just go about their business.  In fact we have even gotten a little “honey” I had to remove some honey comb that had be put in the wrong place. It had some honey in it and we had some of it for dinner the other night. 🙂

More pictures and videos on my Google + profile. HERE 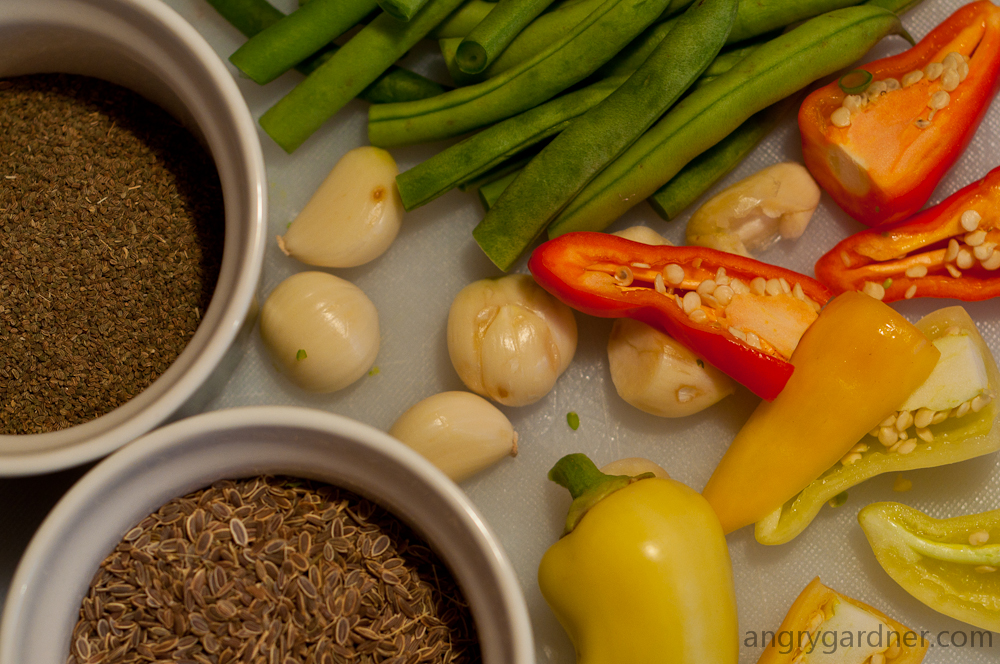 These were the best!! 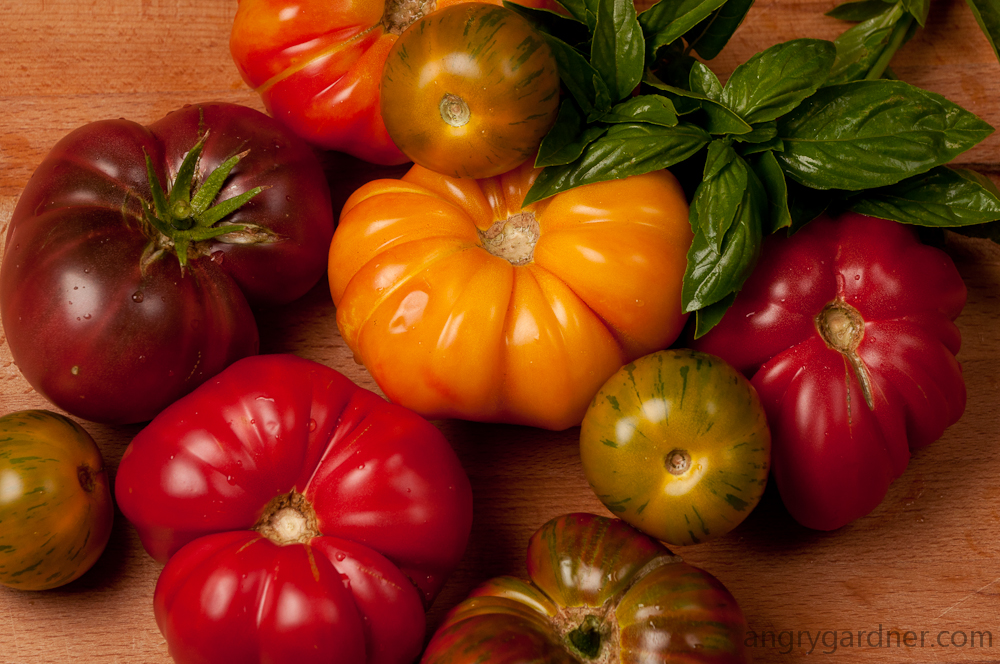 I found fresh hand pulled mozzarella cheese at Harmon’s grocery here in Salt Lake. This was some amazingly great cheese. I decided that to complement such am outstanding cheese I needed to make sure that the other ingredients matched the quality.

So I put a call out onto the Twitterverse for heirloom tomatoes. Bought some incredible fresh olive oil, bottled in California of all places. I do not do reveiws well, but this is literally the best olive oil I have tasted since returning from Italy. California Olive Ranch 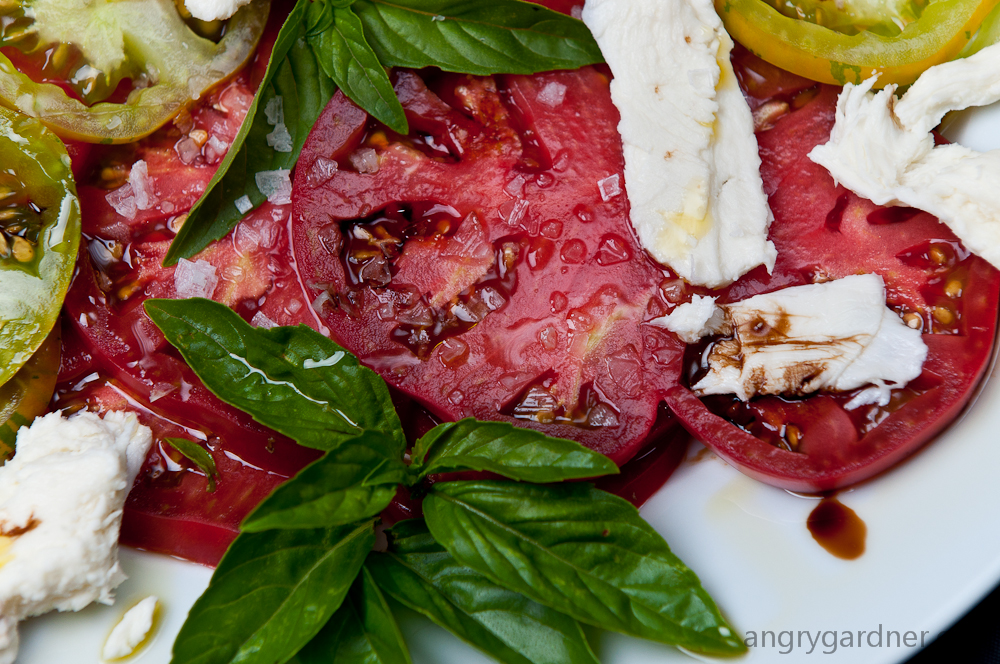 1 lb garden fresh tomatoes
1/2 lb fresh mozzarella cheese. I was always taught in the “old country” to always hand tear the cheese so that you get the strands that Mozzarella is famous.
Several leaves of fresh basil
A drizzle of olive oil and balsamic vinegar.
Sprinkle with sea salt

I have just planted my garden.  Now if I can keep the dog and the 5 year old from killing it.  The dog likes to dig in the new dirt it is soft and warm so she thinks that it is her new bed.  Then today Logan looked at the plants and figured they needed water so he turned the hose on full blast and sprayed them down.  It pretty much dug up the whole thing and the spray spread the dirt all over the back 40.  I love the kid and the fact that he was just trying to help is the only thing that saved him.  He was so proud of himself for “helping garden.

Planted the lilac bush and the peach tree today. I don’t want to overstate things, but at least with concrete you can use a sledgehammer. The clay in west side of the Salt Lake valley is horrible. So it takes forever to dig the hole and then you just turn around and fill the dang thing up again.  I also planted the salsa patch 12 roma, 4 habbies, 2 grape tomatoes, 8 jalapeños, and a bunch of onions and garlic.  Yummy.

This year all I plan on planting is a Salsa Patch. I have made grow boxes that I have filled with “Mels Mix” and  only planting things that go in salsa, habaneros, jalapeño roma tomatoes onions and garlic. It should be an interesting experiment. I am going to start adding pictures to the blog, that whole 1000 word thing. So here are the first this is making the mix and filling of the grow boxes.

I started my plants in the incubator tonight. I have planted a bundle
of Roma tomatoes, Habbies (Habeneros), and Japlenos. I also started
quite a few basil and thyme plants. The other project that I am in
the middle of is my grow boxes. I built 3 8X4X.5 foot boxes for my
pepper and tomato patch.

Well they had blossom end rot and looked like crap, but they were red and inedible.  More should be on the way.  Which is better than last year.  Lots of green one on the roma, blossoms on the cherry, and nothing on the brandywine.

Yesterday was exhausting. I woke up early so that I could put on 2,4,D, onto the lawn. I got the front lawn done and was going to do the back but figured with the temperature hitting 80 it would be a bad idea. I was right we spent all day in the back. The kids ran though the sprinklers, and Christy and I did basic yard stuff. I planted basil and tried to dig out a broken fence post. Stupid fencepost anyway the cement was probably a 30 inches thick and 2 feet in diameter. Being a human jackhammer is not as much fun as it may sound. My entire upper body is sore and I can’t grip anything from using a 25 pound bar for an hour or so to break up this mess of a fence post.

Then later right before it got dark I put down some fertilizer the I got from IFA I really liked it. Fifteen dollars and it did my whole yard exactly.