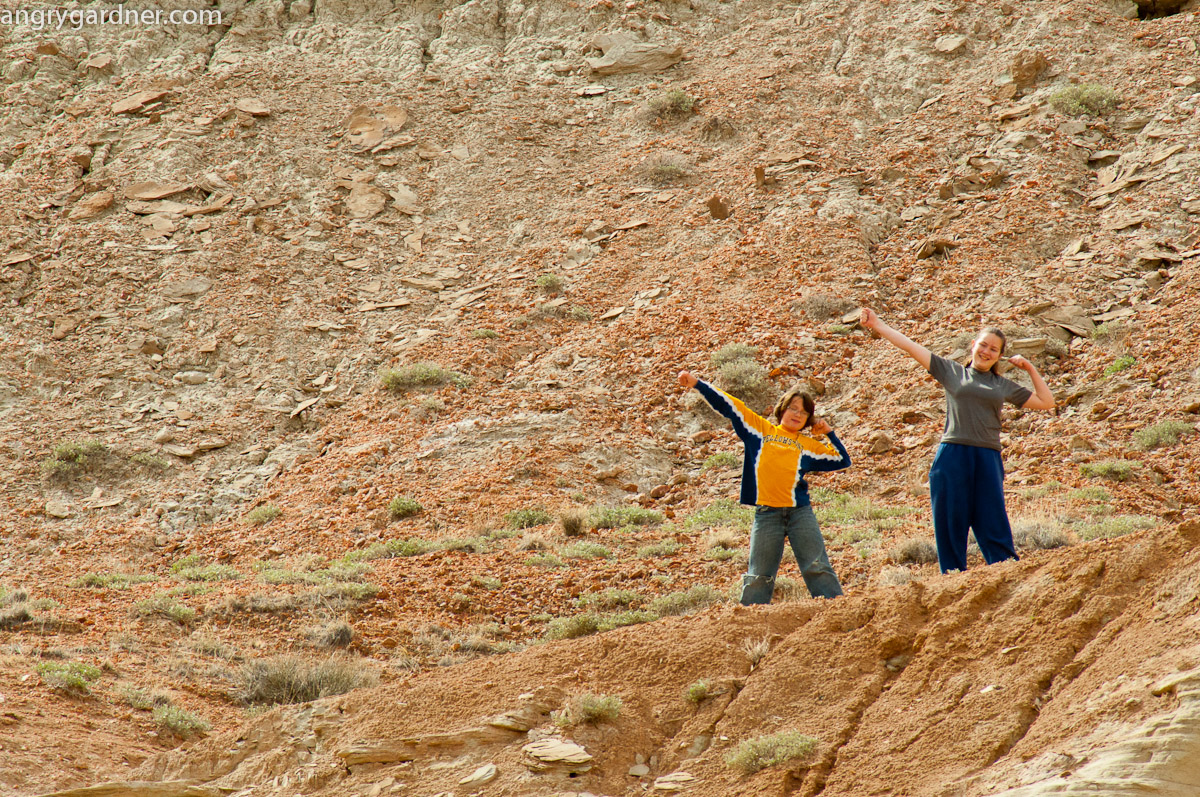 So yeah, it’s been long time. No apologies no promises, just a (long) post. 😉

Last time we went to Goblin Valley for Spring break it cost a fortune because of an broken alternator that had to be repaired in a little town along the way.  This time I was prepared and brought every hand tool I own, well not everything but close.  About an hour and a half into the trip I heard a strange sound, and of course it just kept getting worse and worse.  We pulled off the exit in Nephi and my eagle eyed wife spotted the serpentine belt was coming apart.  So a trip to the auto parts store and we parked in front of Grandma and Grandpa’s house and started the repairs.  Remember how I didn’t bring all my tools, well who would have thought that I was going to need a 1/2 inch socket breaker bar.  Lucky, for me Grandpa had a 1/2 socket set and a wrench that I could use as leverage, and in under an hour we were ready to head out on the road again.

After the break-down and repair we figured that we wouldn’t be able to get too far down the road so we went up Nephi canyon and found a little place to put down stakes for the night; the cold, frigid, night. I’m not sure how cold it got but we were all wrapped up in blankets and watching a movie. Nobody wanted to move or do anything. I finally broke down and fired up the generator so I could turn on the heater. I had hoped to live fully on solar for this trip. Which except for that night we were able to do including the heater.

After a successful experiment of popping corn in the dutch oven we finished the movie in relative comfort and went to bed.  When we woke up in the morning I turned on the heater again and it started to “rain” in the trailer.  Apparently, all the breathing and water in the air had frozen to places on the ceiling, and as it warmed up the ice melted and started dripping down on us, not a big deal but a little surprising.  After a breakfast of waffles thanks to a surprise find at DI, a cast-iron waffle press.  We opened the door to the trailer to find snow on the ground.  Not a great big surprise considering the night before.

However, the big surprise of the trip did come later that day. While in Green River, Utah picked up one of those free travel guides. They had a little blurb for the John Wesley Powell Museum <LINK>. This was the coolest little place with tons of interactive displays model dinosaurs just a fascinating way to spend a hour or so. We really recommend this if you happen to be in the area.

Earlier on, before we left Nephi I pulled out the guns and we all tried to kill a soda can or two. Once again my daughter, whoa she can shoot. 3 direct hits on a 3 inch target from about 30 yards away. Anyway as we were policing the brass my youngest wanted to keep all the cases that we found. Little did I know how much mileage he would get out of those.


They were his toys for the entire trip. And along the way when we stopped at a rest stop on the way he was able to trade one of them for a arrowhead from some people there selling jewelry.  From then on every store/shop we went into he was trying to make some sort of trade.

Rolling into Goblin Valley late into the evening. I was tempted to stay at the campground, but since thankfully it was full. Christy asked ranger for his thoughts and he directed us down Little Wild Horse Road. We did just that and found ourselves in the most secluded camping spot ever. Right up inside a slot canyon away from everyone and everything. The weather was perfect and the kids were in climbing/exploring heaven. 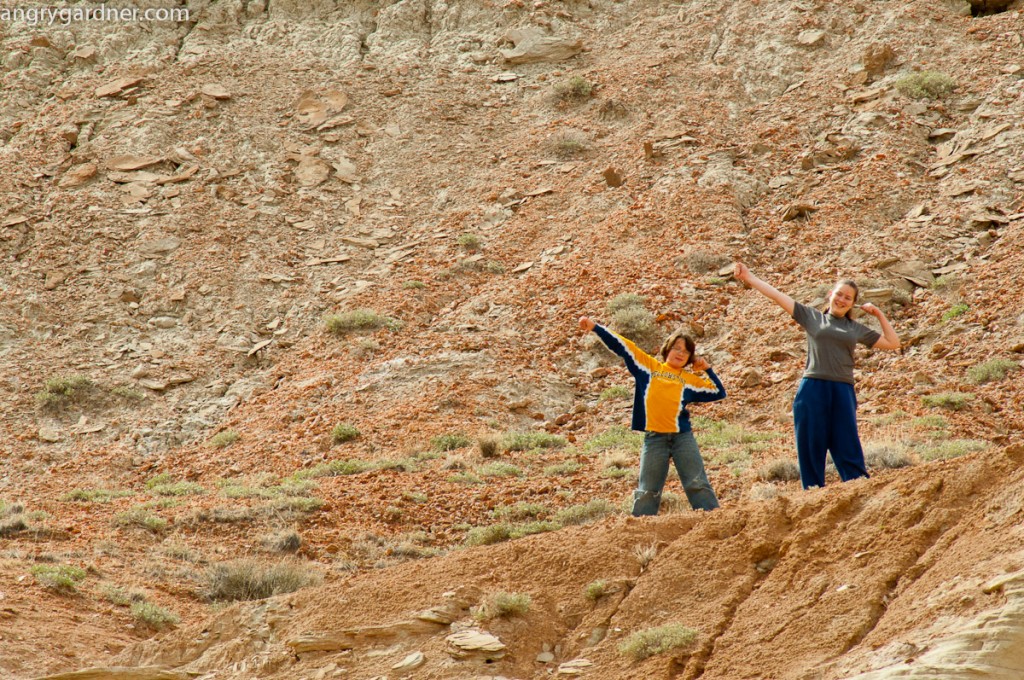 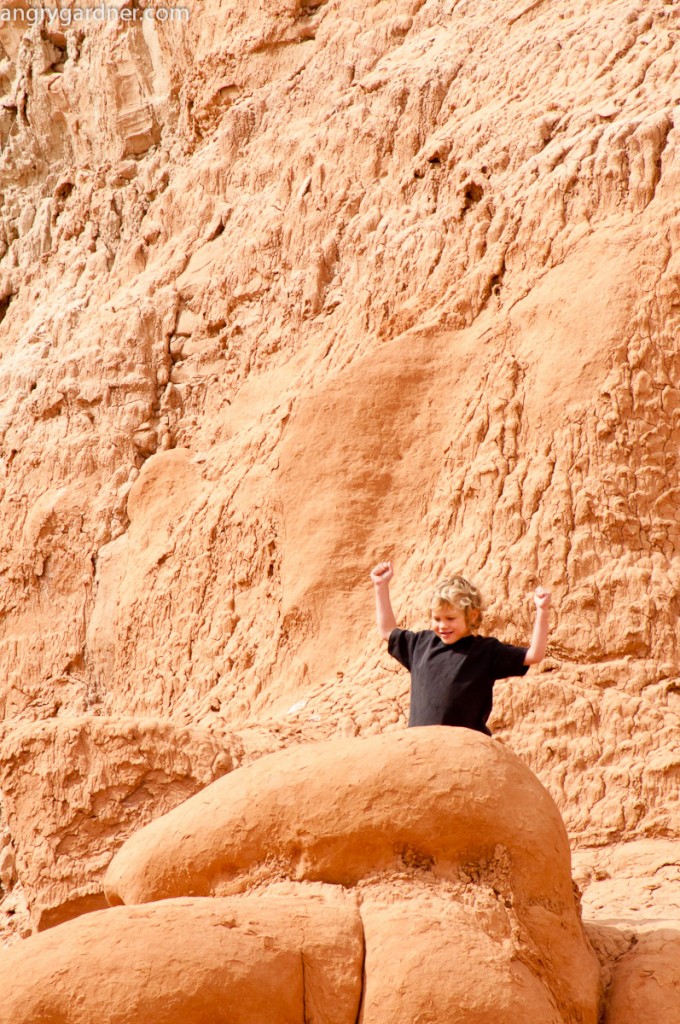 So those clear Winter(ish) nights made for some amazing stars.  I had to try to capture them again, even though every time I try I fail.  I don’t think this time is any different, but hey I tried which is a step in the right direction. 🙂  I even came up with a little trick.  To frame your camera shine a flashlight through the viewfinder it will bounce off the mirror (in your DSLR) go through the lens and light up what is in the frame.  Sweet! right?!?  Make sure your camera is off at that point as I understand the mirror is semi-transparent and it might mess the sensor.

Finally! We have arrived at our destination. While I think Goblin Valley is an amazing location and is a must see for everyone within a days drive of it; this time I just wasn’t into it. The kids, however, went nuts. Climbing and getting a little crazy. I ended up taking a nap in the trailer and then a couple mile walk to the visitor center and back. Which was really enjoyable. Once I got back it was back on the road again.  Luke apparently was on a quest for “nine-tine power crystals”.  There are nine of them in the world and one of them just happened to be in Goblin Valley. It also just happened to be clear up the side of one of the cliffs. He got in a little over his head, but lucky for him Mom was there to bail him out.

Back into the Waterpocket fold. We have wanted to stay in the campground at Capital Reef for quite some time now and finally took the time to do it. We got there a little late. After getting all settled in we went to watch the special program that we were told was starting soon. We waited and waited and finally went and checked the schedule only to find out that the presentation is only on Thursday and Saturday not Friday night.  I completely get that <not>. 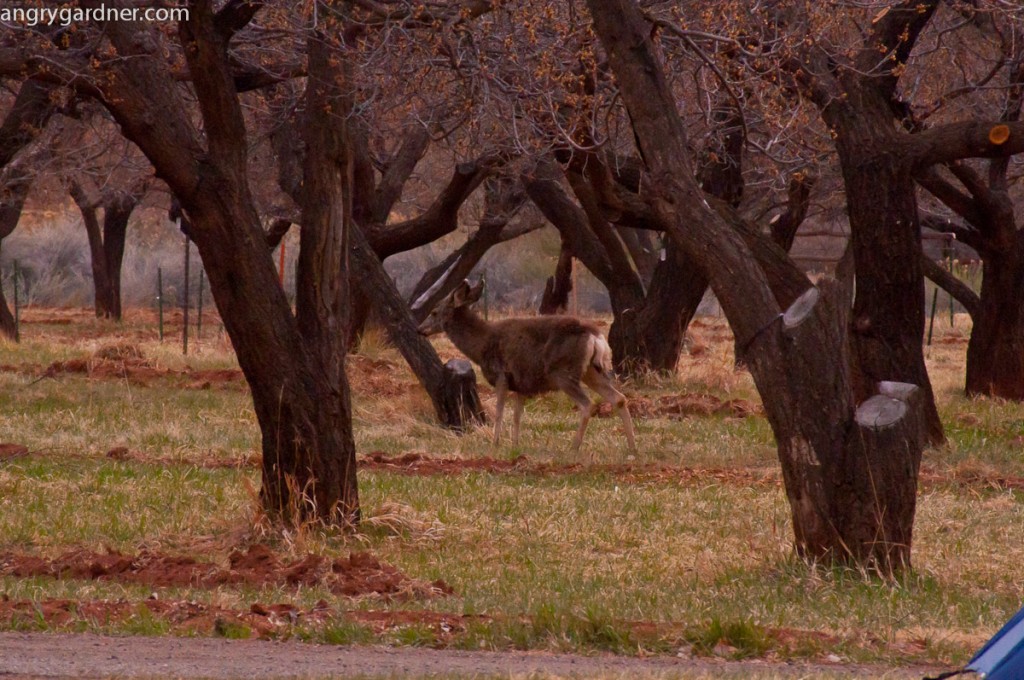 Wildlife right in the campsite.  These are the managiest sickly looking deer I have ever seen, the rangers said that is because they only eat fruit and what ever the humans feed them; soooooo Doritos and peaches no wonder they look awful. 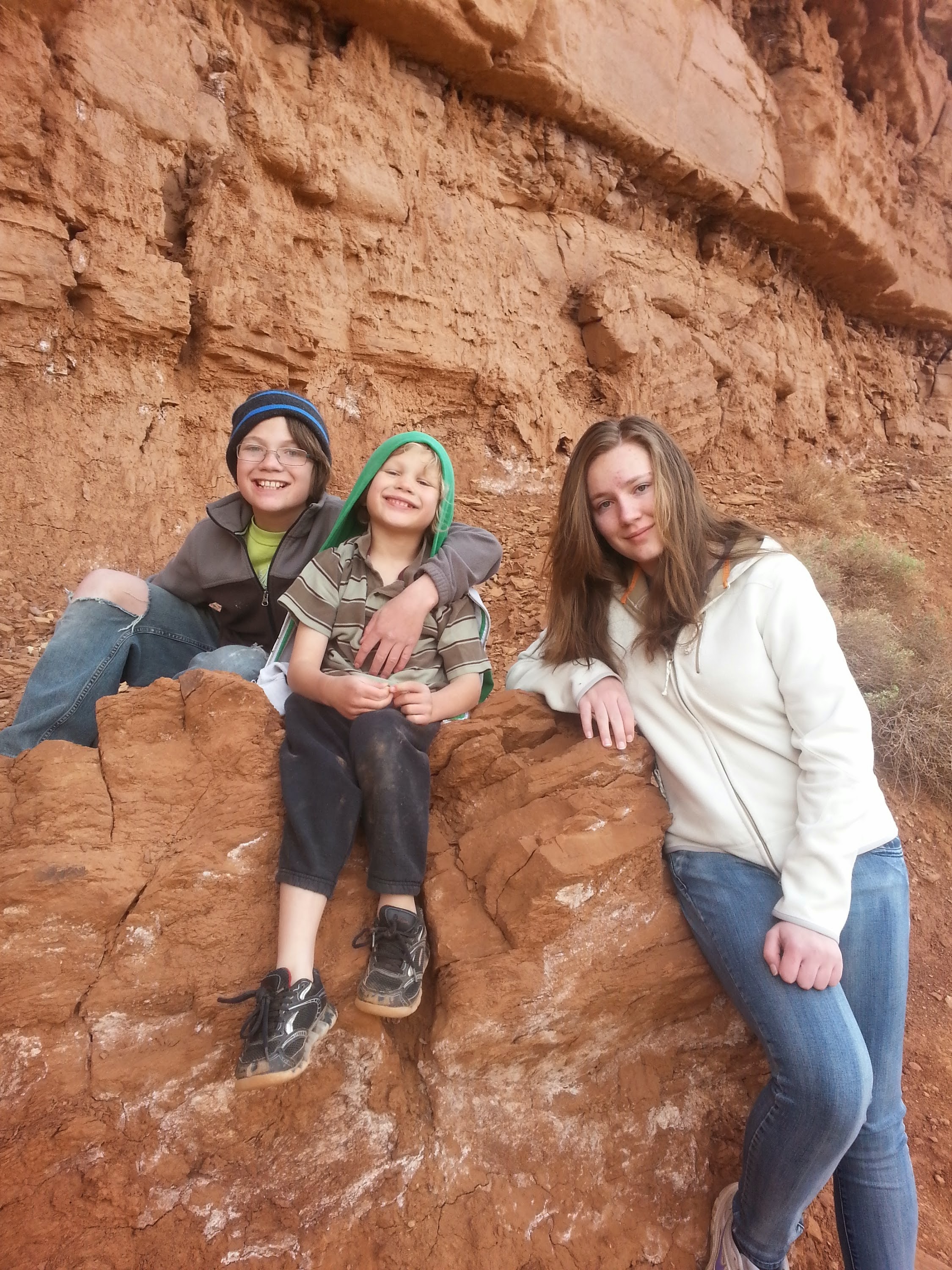 I didn’t get to do much hiking, but a little one with all the kids.  Then the two oldest continued on up the trail to the end and along with 900 selfies that she took on my phone Chey took some really fun panoramas.

So the final leg of the trip included a stop at Fillmore. We are kindly invited to dinner at my sister’s house. It was a whole bunch of fun as the kids ran screaming around and we ate hot dogs. One last night in the trailer and we closed it up and left it at its new temporary home. (stupid Salt Lake County ordinances not letting us park it at our house). Too little time for everything and we were back on the road north.

A great trip always ends at home. We got home exhausted and ready for bed. I made a dinner of some Elk Steaks that my brother-in-law gave me marinated in some honey-vinegar that my sister-in-law gave me with some roasted potatoes. It was a delicious end to a fun trip.

One of the funniest scenes from one of the funniest games of all time: Portal 2. It was also heavily quoted for the whole trip. “Man I wish I had a waist …” And since literally nothing was planned in detail everything was an “adventure” We had no idea where we would be staying the nights etc. So when anyone asked about plans I was very likely to reply “Adventure sphere Rick” followed by a quote.