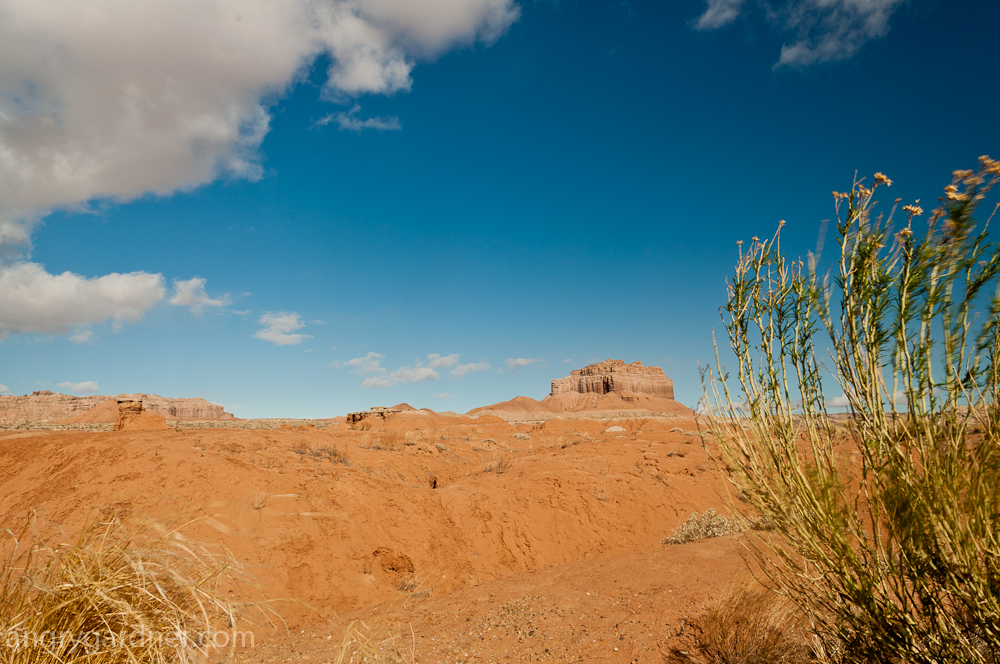 With the first real spring break my kids have gotten from school I really wanted to spend as much time with them.  So between trying to keep my extra time at work to a minimum, I decided that a family trip would be alot of fun and it was well needed.

We decied to head south to Goblin Valley State Park.  We couldn’t decide when we were leaving and by the time we left and drove down it was midnight and there were no camping spots and there was a such a strong wind that we couldn’t put up the tent.  Why didn’t we have the trailer?  Because no one but me thought we should.  So at midnight we all tried to get comfortable in the Expedition.  FYI the driver’s seat is not comfortable, but I am sure  it was more comfortable than the passenger seat with a 4 y/o which is how Christy slept.  Did I mention  it was also cool, below freezing “cool” plus windchill.  But this was the view that we woke up to…

Did I mention that the check battery light came on. No big deal I was idling and when I revved the engine the light went off.

After breakfast in bed we started exploring Goblin Valley. I have always wanted to check it out and I was really glad we could go and see it. 🙂 It was truly amazing I really recomend it to everyone. I want to go back in and do night shots sometime. 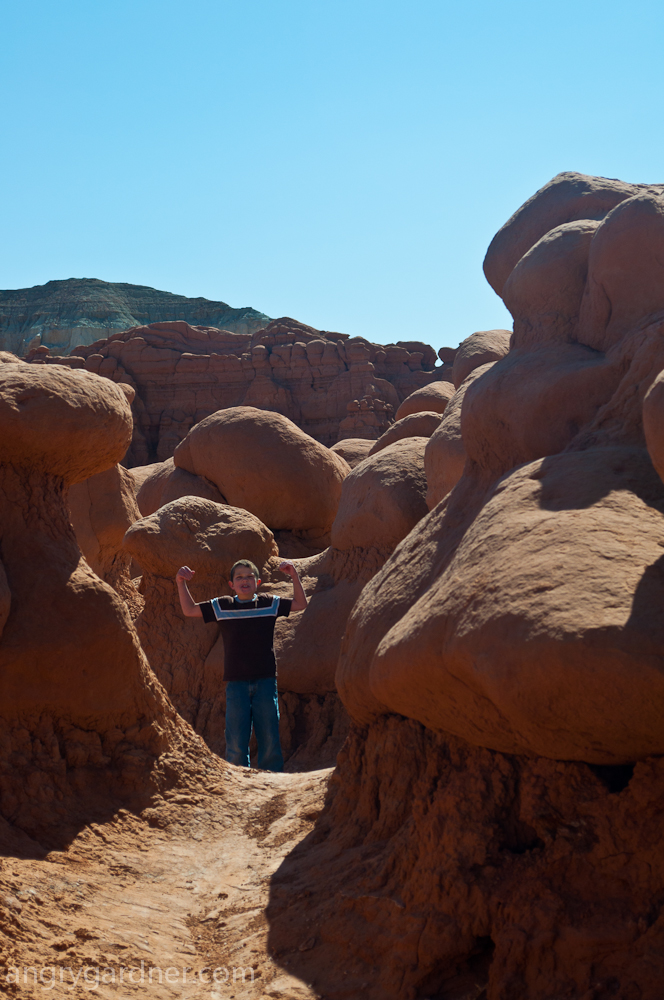 Mom and her boys.  It took her hours to to get warm after hiking around in this valley in the wind. 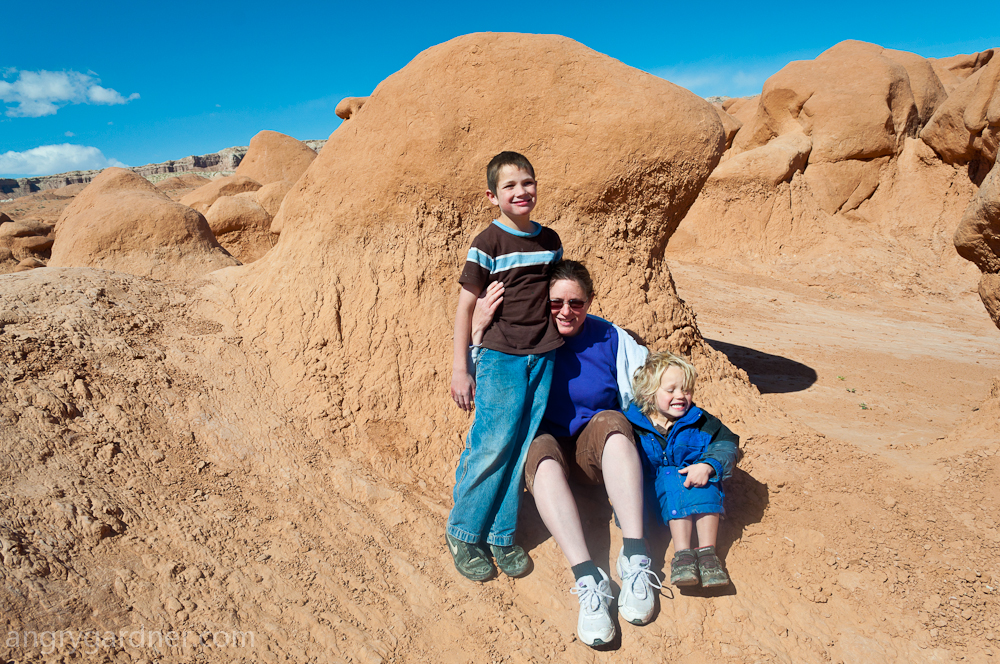 She is really starting to be quite the teenager 😉  It was quite amazing how comfortable some of these  rocks were. 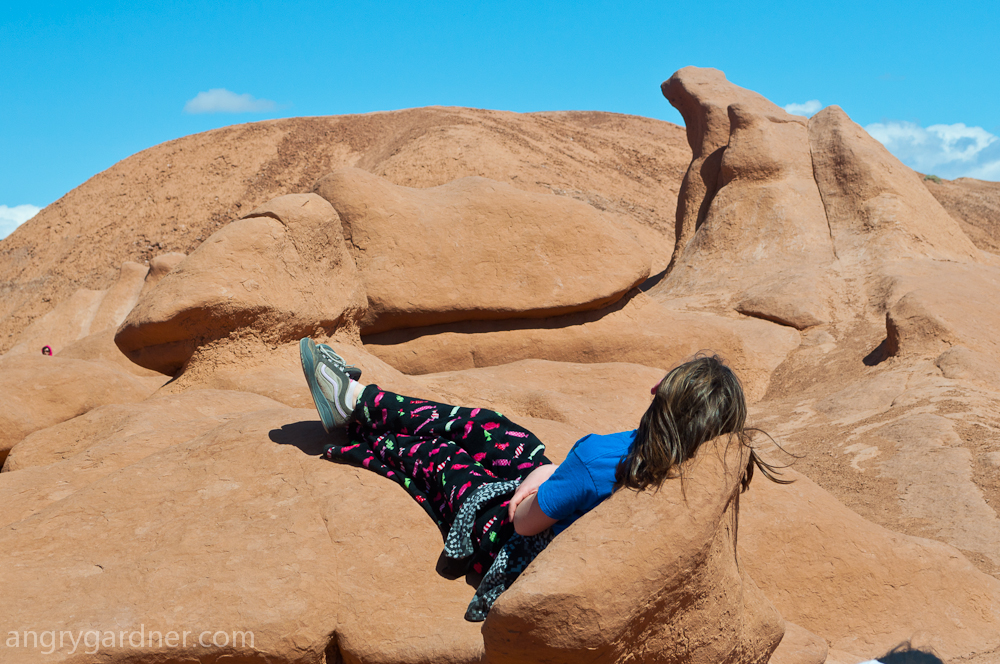 Luke became very adapt at discerning good “Globulens” from evil “Globulens” good Globulens were ignored, but the evil Globulens had their hearts (dirt clods) ripped out and used as bombs against other evils. It was absolutely hilarious.

So as we were leaving Goblin Valley I started to get a little nervous that the check battery light was not going off no matter what I did. For those of you who have not been there this is in the MIDDLE OF NOWHERE don’t even think about getting a cell signal. I was starting to get a little (alot) nervous.

Anyways on a favorite of our family Capital Reef!!! Oh how we love that place.

So by this point the battery light had not gone off at all.  We felt like we needed to cut the trip short and head for home.  Hopefully, we would be able to make it there before the car gave up the ghost.  I started to notice as we were driving that the electrical gauge was starting to drop ever so slightly.  So by the time we hit Loa Utah I stopped for gas as I was filling the car up I was making use of my phone to try and plot out the best plan.  I was also wildly flinging up silent prayer as to what I should do.  I filled the car up and away we went; about 100 yards I saw a Napa Auto parts store and I was told to pull in there. So I did.  We tested the battery/alternator and the battery was at 10.4 and not being charged at all by the alternator.  In fact it barely even started the car to pull it into the shop.  So we ended up adding $320 to the local economy, and a new alternator to my car. It was more than I would have spent if we were home, but it got us home safe and was a bargain compared to some of the alternatives.

I was right though it was a very fun trip and it was so worth it.  I loved listening to Chey and Logan play I spy which was just a method to do 1,2,3 JINX and then start hitting each other (fun and laughing the whole time).  Listening to Luke as he crafted one amazing story after another. Heck I even thought Chey’s I made up the most annoying song in the world was a little funny. 🙂 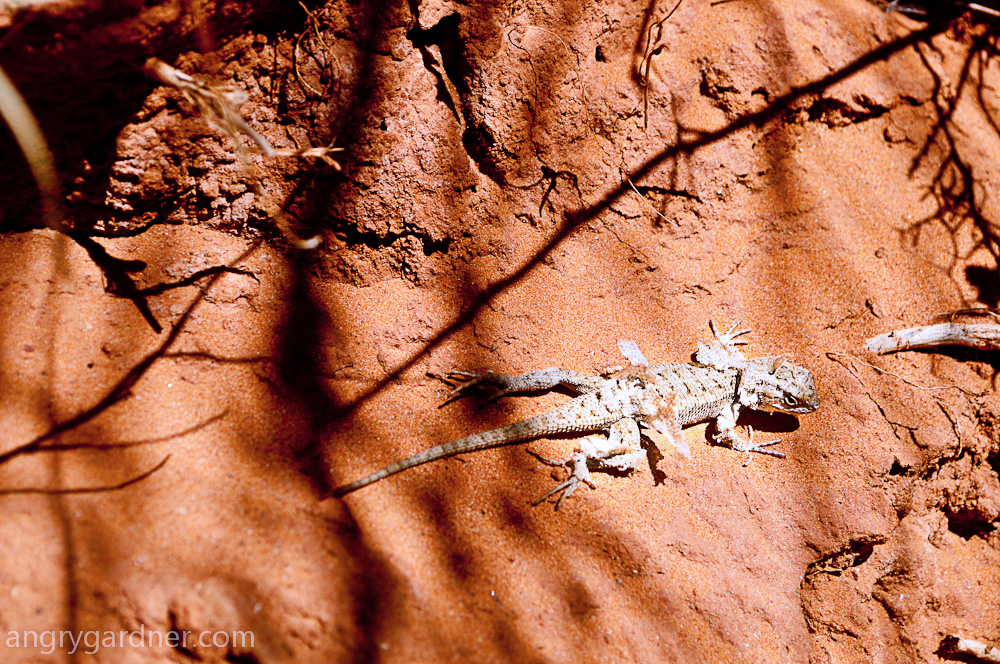 PS If you are wondering about the different styles of pictures.  I started using Instagram, a photo social media site.  If you are on it give me a follow and I will surely follow you back.

One thought on “Family Road Trip”